WordPoints version 2.3.0 has just been released, and includes several new features and improvements, in addition to some minor security hardening and a few small bug fixes.

First, a small security issue was patched similar to a fix that was made to WordPress itself in version 4.7.3. It was discovered that the Delete Plugins screen could be used to delete any file on the server, not just plugins. The code for the Delete Modules screen in WordPoints is based on that code from WordPress, and so it suffered from a similar issue. This has now been hardened so that only module files can be deleted from this screen. This is a fairly minor issue, since only users who had the capabilities to delete modules could have exploited the bug.

Now to the new features in this release.

One new enhancement is that it is now possible to disable an event reaction temporarily without having to delete it: 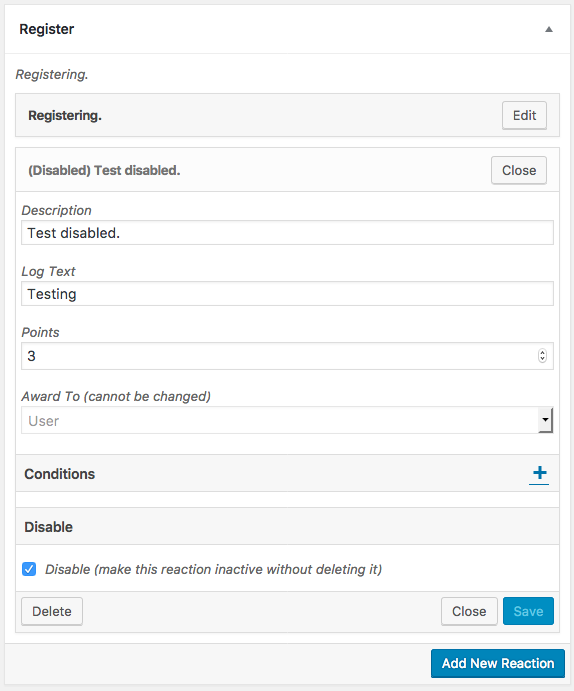 Disabled reactions will not award points while they are disabled, and will not be displayed by the How To Get Points shortcode.

Each of the widgets that WordPoints has was also tweaked to improve display on narrow sidebars. Changes include:

In the process a bug was discovered that caused widgets to just show an error about the Points Type being invalid when they were first added via the Customizer. This bug is now fixed.

In addition, many more small improvements and fixes are a part of each release, and this one is no exception. A full change log including internal code improvements can be found on the plugin’s GitHub repo.

If you have any suggestions to share, or would like to know what features are planned next, check out the plugin’s roadmap. We’re always invigorated by your great ideas!

Need help customizing WordPoints to meet your needs? Get in touch for a free quote!